2020 will have many major events that will influence how we do business. The possibility of recession is still lurking in the shadows. An election of generational importance will shape America’s future. The Olympic Games should offer a summer distraction. 2020 will be tough to predict, and many say a wild ride.

This is important because each person on your team has a different world view about what the future will become. Some believe there is little hope while others believe in unlimited possibilities. It is just as important for “belief in the future” alignment as it is to have the sales and marketing activities aligned.

I'm looking forward to the coming year. I can’t remember a time when there has been more opportunity for new adventures. This coming year will provide more and those with the right plans, processes, and aligned teams in place will leap forward.

Let’s take a look at predictions from the past…

Some have predicted that 2020 will be unbelievable. For instance:

We don’t need a prediction to see the trends. People will be more involved and want truth. There will be demands about fairness, they want their voices to be heard.

The Predictors are Consistent – and Wrong

A study about prognosticators between 1992 and 2014 show their predictions were consistently wrong:

“Prakash Loungani and his colleagues at the International Monetary Fund conducted the most sophisticated studies of economic forecasting, assessing the accuracy of economists in 63 countries between the years of 1992 and 2014. The results, as my colleagues at Bloomberg have noted (see here and here) are mind-blowingly awful. In fact, every single country displayed the exact same bad track record of predicting recessions. Moreover, as Loungani and his co-authors noted, ‘the forecasts of the private sector and public sector are virtually identical; thus, both are equally good at missing recessions.’”

A year ago many experts were predicting a recession would enter a recession just before the election. If you believe the experts will continue to miss the mark, you will likely not take their prediction too seriously.

Beyond the experts are the hopes and dreams of company’s products or services to be the next big thing. “It will make millions” turns into a “Let’s stop this insanity.” For instance, Uber started working on its autonomous driving technology in 2016, after purchasing the self-driving truck startup Otto. Between legal battles over patent infringement accusations and a fatal crash in 2018, Uber decided to officially shut down its self-driving truck venture. There are other “next big things” from the 2010’s that became obsolete.

With this in mind, here are 2020 predictions and priorities which are both sad and hopeful:

The housing market in the U.S. could enter a recession in under five years, with online real estate company Zillow predicting that it will happen in 2020.

Mark Jeffries, author and former Fox and NBC anchor, suggests that 2020 will be a year when people talk more about the concept of “Augmentation” rather than “Automation”.  He’s hopeful that, in 2020, the debate will shape up to optimize around what technology can do WITH humans rather than WITHOUT them.

2020 will bring yet more oil, from Texas to off shore rigs in Norway - but the world is not likely to need it. As economic growth slows, so, too, will demand for oil—and any geopolitical shocks will cause only temporary spikes.

The number of women at the helm of Fortune 500 companies currently stands at 35, a historic high for our index. Fortune.com says to expect that number to increase as a push for board diversity leads to more women getting the top job.

Facial recognition technology is beginning to pose a major privacy threat. As ­demonstrations around the world grow over political and environmental issues, protesters increasingly take measures to evade facial-recognition technology. Some use old-school scarves or umbrellas, but others turn to more innovative tools—fashion and makeup designed to confuse image-­recognition systems and masks that make the protester look like a different person. This can become a concern in some areas if the public feels less safe if they see too many face protectors.

The latest faddy plant-based milk is made with bananas, sunflower seeds, and cinnamon. It tastes like bananas but with a little zest.

“If I really like bacon, I’d be kind of stocking up,” says Steve Meyer, an industry economist with Kerns & Associates in Iowa. With African swine fever ravaging China’s hog industry, U.S. experts are expecting pork prices to go higher and likely stay elevated well into 2020.

This is disappointing because I really like bacon. It is the one element you can add to almost anything that will change the meal from average to delightful. Will you stock up on bacon?

Here are the areas B2B content marketers say they are prioritizing:

Almost half of the B2B content marketers surveyed for a report from the Content Marketing Institute (CMI), one of the top priorities is improving the quality and conversion of audiences.

Marketers are also focusing on the quality and quantity of the content they produce (46% selecting as a top-3 priority).  B2B buyers have expressed a desire for more data and research-based content, while other buyers are put off by jargon and what they consider to be ‘fluffy’ content.

This may not be news to you but if others are increasing their focus on these areas, standing out in the crowd may become more difficult. Good enough today is not good enough tomorrow.

When B2B Buyers Want to Speak with Someone

The National Association of Manufacturers released the results of the Manufacturers’ Outlook Survey for the fourth quarter of 2019. The survey shows that manufacturing optimism has stabilized with nearly 68% of manufacturers reporting a positive outlook for their business, essentially the same rate as the third quarter release.

When software companies, media companies and consultants use the “because ‘everyone’ is there” argument, hesitate before you jump in.

For instance, the United States Post office delivers to nearly 159 million addresses in the country — covering every state, city and town. Everyone living in the United States and its territories has access to postal products and services and pays the same for a First-Class Mail postage stamp regardless of their location.  usps.com

“Everyone is using it” is not enough to take action on. To make the case that the best opportunities exist because “everyone has a cell phone” or “everyone is using social media” – is weak and potentially a sandcastle washed away with each tide.

It is good to know that “In the U.S. alone, 77% of people have some type of social media account — and globally, there are over 3.7 billion social media users.” (HubSpot) It is too easy to leap before listening and planning, only to land with a revenue+profit thud.

With this in mind, here are statistics to keep in mind before you make a blogging decision:

You have seen many predictions, statistics and trends. For 2020, I recommend a focus on marketing and sales alignment, personalization strategies, marketing automation; and use social media to do more than post to achieve direct B2B engagement.

Take a more holistic view of the way your business operates. Discover new ways to create synergy between departments, dramatically improve communication, and create more visibility throughout your organization.

In many instances, it is only necessary to change one element to make a major revenue shift. The element could be strategy, software, team, culture, or leadership. (Such as a CRO.)

There are free tools to help you grow future revenue and profitability in our B2B Business Growth Library. If you have any questions, please take a moment to reach out to me here. 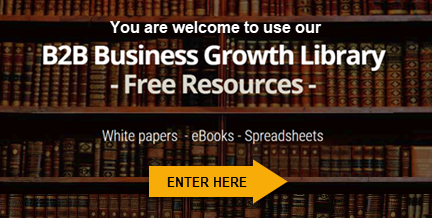